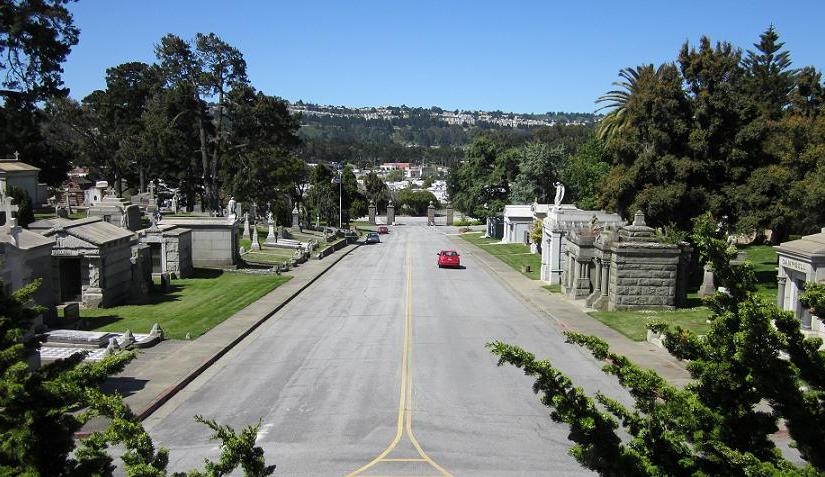 California: the land of sun and stars, beautiful beaches and lush national forests. Since its entrance onto the American stage 170 years ago people have flocked to the Golden State, drawn by a promise of adventure and opportunity. This was especially true around the turn of the century.

An unfortunate side effect of any rapid influx of people, especially back when daily life and travel was much more hazardous, is that more people eventually means more death. You may even end up with more bodies than you’re prepared to deal with.

Enter the small town of Colma, where the dead outnumber the living 1000 to 1. Known as California’s City of the Dead, aka City of Souls, aka the last place you’d want to be during a zombie uprising. The last nickname may have been made up but think about it… 1000 to 1.

The story of how Colma became The City of the Dead is woven into the broader story of California itself. Mexico ceded the territory to the United States in 1848 and within a year’s time, gold was discovered in the Sacramento River. This put the brand new state on the map in more than just the literal sense. The famous California Gold Rush had begun.

Over a very short span of time, hundreds of thousands of Americans hopped on the Oregon Trail and headed west hoping to strike it rich. By 1860, San Francisco’s population tripled. Not only did the rush attract eager prospectors, but the population boom made the city a place one could find a job. Recent immigrants to America saw opportunity as well and poured in almost as fast as the gold seekers.

Some who came west found the opportunity they sought, but many more didn’t have such luck. The grand majority of people looking for gold didn’t find so much as a nugget. They remained packed in tight living conditions with thousands of others like them, who had little to show for their efforts. Conditions worsened for these people as hygiene and clean food and water became harder to maintain. Areas like this became a powder keg of sorts, where any number of contingencies could lead to ignition.

Inevitably these contingencies would eventually manifest in four major events that would devastate the Golden City. The first of these took the form of a bubonic plague outbreak in 1900 killing hundreds. Cremation was uncommon at the time for religious reasons so the bodies just piled up. The city’s cemeteries had so few vacancies that new burials were banned the same year.

Not long after, in 1906, San Francisco was hit with a powerful earthquake that leveled the city in minutes. Destruction was massive as buildings had not been constructed to withstand this kind of stress at the time. The death toll for this second disaster reached into the thousands, making the recent plague look like a case of the sniffles.

A direct result of the earthquake came in the form of a great fire that burned what was left of the city. Over the course of four days approximately 25,000 buildings stretching over 490 city blocks were reduced to ash.

The fourth and farthest reaching disaster came twelve years later as San Francisco had all but recovered from the past two tumultuous decades. In 1918 the global Spanish Flu pandemic emerged in Europe, America and Asia before spreading worldwide. The flu claimed around 675,000 American lives and an estimated 20-50 million the world over.

Despite the years of devastation, San Francisco maintained its popularity. The city continued to grow as developers simply built over the rubble left behind after the earthquake and fires. Given its location on a peninsula, the city could only expand so far. As a result, the somewhat limited real estate was becoming more and more valuable. Suddenly all of the wide open spaces devoted to graves for all that had perished started looking too good to the developers to just leave to the dead.

In order to get the ball rolling, rumors were spread that the graveyards within the city were a source of contagion. The exact nature of the contagion was never divulged, just that it was making people sick and the culprit had to be purged before more San Franciscans fell victim. And if a few real estate developers made some money in the process, so be it.

Eventually enough political pressure had been levied that something had to be done. The land south of the city was largely undeveloped at the time and there were few people living that far away from the general populous. San Francisco’s funeral parlors began buying up large swaths of land and started digging.

In 1924 the nameless area was incorporated into San Mateo County, filing as Colma. A new town was born, stretching over just two miles of land with fewer than 1000 residents, most of whom worked in the funeral industry. Over time more than 150,000 bodies were exhumed and moved south to Colma to be reburied.

Today the number of dead has swelled to around 1.5 million, while the living population remains relatively low at about 1,600. Although San Francisco remains the number one draw on the peninsula, Colma has become a popular stop for tourists. The dead are more of a footnote on the Town of Colma website however, which attempts to draw more attention to its “old-world charm,” museums, and shopping centers than to the millions of decomposing bodies in their backyards.

Visitors to Colma will find the city itself actually embraces its claim to fame. One can tour all 17 of its impeccably manicured cemeteries and leave with a shirt that reads “It’s Great to Be Alive In Colma!” The graves serve as a sort of history of San Francisco over the past century. You should recognize a few of Colma’s most famous residents like Levi Strauss, Wyatt Earp, William Randolph Hearst, and Joe DiMaggio.

So next time you find yourself in the Golden State be sure take a walk among the tomb stones in Colma. Like 99.9% of the town’s population you may even decide to stay forever.

The New York Times “The Town of Colma, Where San Francisco’s Dead Live”

All That’s Interesting “Colma, California: The City of the Dead”