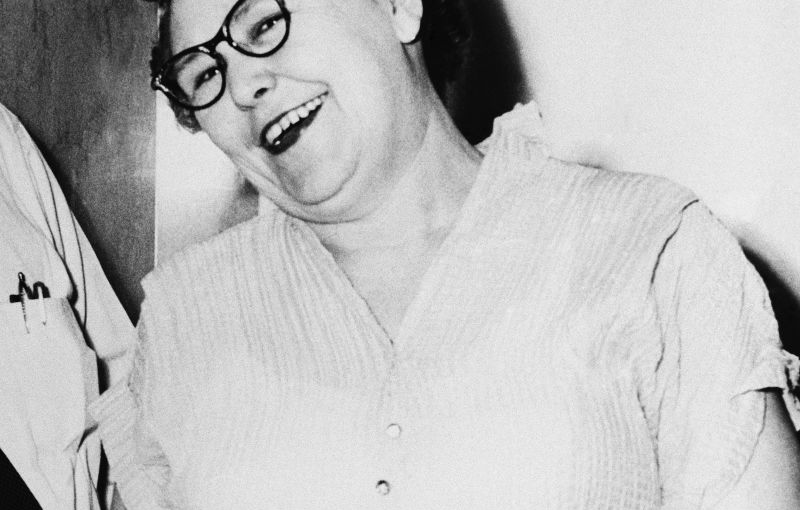 In Part III, we covered the life and crimes of the “jolly” nurse Jane Toppan. Today’s entries are being released concurrently as they focus on two more women you would never have seen coming. Much in the way people trusted Toppan as a nurse, these women didn’t fit anyone’s idea of what a killer looks like. Nannie Doss and Leonarda Cianciulli would have reminded you more of your Grandma than of Ted Bundy. They might have even offered you tea and cookies, but you’d be wise not to accept any consumables from these ladies.

Nannie Doss, born Nancy Hazle on Nov. 4, 1905, in Blue Mountain Alabama, had an unhappy childhood. She and the rest of the Hazle family lived under her father James’ strict and often abusive rule. As education was of little import to the family, Nannie left school after sixth grade to focus on household chores.

At 16, Nannie began work at a linen factory where she met her first husband, Charley Braggs. While living at home, she and her sisters were never allowed to wear dresses or makeup and talking with members of the opposite sex was likewise forbidden. She saw Charley as an escape from this oppression and the two were married within the first year of their meeting. She moved in with him and his mother in 1921.

Despite her high hopes, Charley turned out to be an abusive alcoholic and his mother a control freak much in the same manner as Nannie’s father. Six years and four children into the marriage, she found the escape she had been seeking. In 1927, the Bragg’s two middle children died suddenly after breakfast one day. Doctors attributed the deaths to food poisoning, a more common killer at the time.

Suspicious of Nannie, given their deteriorating marriage, Charley moved out with their eldest daughter, Melvina. The controlling mother-in-law didn’t last long after her son’s departure, and died under mysterious circumstances. In 1928, Charley returned briefly to drop Melvina off, and finalize their divorce. He would be the only man to survive a marriage to Nannie.

Before long, Nannie decided it was time to move on and took to the lonely hearts column of her local paper for prospective mates. It was through these ads that she met and married her second husband, Frank Harrelson in 1929. They spent a mostly unhappy 16 years together. Like Nannie’s first husband, Frank was an alcoholic. After a particularly hard night of drinking with friends, he returned home and forced himself on Nannie. Revenge was swift, and came in the form of rat poisoned corn whiskey. Frank died an agonizing death while Nannie watched on.

In 1943, Nannie became a grandmother at just 38 years old. Her daughter Melvina had a son, Robert, and a daughter who died shortly after being born. Accounts from family that were present at the hospital would later surface that allege Nannie had stuck the newborn with a hairpin while Melvina recovered from the delivery. Just a few months later, Robert died from asphyxia while in his grandmother’s care.

Nannie was married again in 1947 to Arlie Lanning, another alcoholic. This marriage lasted only two and a half years before the man fell suddenly ill and died. No autopsy was performed as doctors believed the death was due to a heart attack brought on by Arlie’s lifelong drinking.

1952 saw Nannie’s fourth marriage to a Richard L. Morton. Although this one was not an alcoholic like her previous beau’s, he seemed to have a tenuous grasp on the sanctity of marriage. He didn’t last long after Nannie discovered he was seeing an old flame on the side. One arsenic laced thermos of coffee later, Morton joined Frank and Arlie on Nannie’s burgeoning list of victims.

Nannie’s fifth and final marriage was to Samuel Doss in 1953. This time she decided to go against her usual type. Samuel was neither abusive nor an alcoholic. If anyone could temper her murderous tendencies, this man was it. Or so it seemed for a time.

It would seem Nannie’s previous husbands had ruined her for more mild mannered individuals. She found Samuel uptight and boring. He lived a strict and disciplined life, enforcing household bedtimes and forbidding what he saw as frivolous activities like magazines and television.

Nannie was particularly not fond of Samuel’s tight grip on their finances. She ended up moving out for a short time until he agreed to add her name to his bank account. She returned a much more affectionate bride and Samuel believed the matter settled. Such was their marital bliss that he didn’t think twice when she convinced him to take out two life insurance policies with her as the sole beneficiary.

When Nannie decided it was time to collect, she set right to work. An arsenic-laced prune cake almost did the trick, but resulted instead in a months long hospital stay for Samuel when he complained of extreme stomach pains. Nannie’s upped the dosage for her second attempt, this time in his morning coffee.

Her deceased husband’s doctors took note of how quickly he passed after returning home and ordered an autopsy. When the report showed staggering levels of arsenic in Samuel’s system at the time of his death, Nannie topped the list of suspects and was arrested in 1954.

Nannie was surprisingly forthcoming with her confession, which police received in return for allowing her to keep romance magazines in prison. She appeared to actually enjoy the attention she received during her trial and the investigation into her murders. She was often seen smiling and laughing and made jokes about her late husbands. She earned the nickname the “Giggling Granny” for her unsettlingly cheery manner throughout interviews and the trial process.

On May 17, 1955 Nannie Doss received a life sentence at 50 years old. After eight years of incarceration, she died of leukemia in 1963 while housed at the Oklahoma State Penitentiary. She is believed to have claimed at least 11 lives before she was caught.

gizmodo.com “The “Giggling Granny” Serial Killer Who Smiled All the Way to Prison”